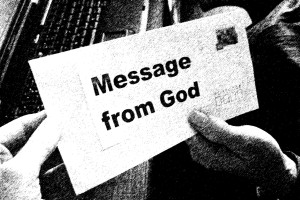 16 Then the Lord said to Moses, “Tell Aaron, ‘Stretch out your staff and strike the dust of the ground,’ and throughout the land of Egypt the dust will become gnats.” 17 They did this, and when Aaron stretched out his hand with the staff and struck the dust of the ground, gnats came on people and animals. All the dust throughout the land of Egypt became gnats. 18 But when the magicians tried to produce gnats by their secret arts, they could not. Since the gnats were on people and animals everywhere, 19 the magicians said to Pharaoh, “This is the finger of God.” But Pharaoh’s heart was hard and he would not listen, just as the Lord had said. (Exodus 8:16-19)

When believers ascribe glory to God for something that is unusual that would be expected. But when unbelievers do the same that is surprising. Normally a person who does not believe in God would brush off a miracle or a sign from God as mere coincidence. They might explain it away using science or scientific facts, as if, by doing so, they would imply that there are two separate realities: science and spiritual. That is of course not true, for all realities, whether natural or supernatural, have spiritual connotations or implications. But it’s hard for unbelievers to acknowledge anything that might be associated with the concept of God. However, in Asia for instance, people are more open to this possibility. Especially when they can no longer explain away the event or phenomena. The suggestion that perhaps something might be of God, or at least supernatural in nature, should cause you to pause and think. What if it is true? If a friend, who normally would not talk about God, or describe anything as coming from God, or at least something that might have supernatural connotations, would come to you and tell you that perhaps such and such is from God, would you listen? If he or she says, “I think this is from God,” would you consider that as a cue? Perhaps God is indeed speaking to you or calling your attention about something. Would you pause for a while and perhaps reconsider your current direction? Do not harden your heart. Learn to take the cue, especially when it is coming from someone you don’t normally expect would talk about God.