Home » Devotions » Take it to heart

Take it to heart 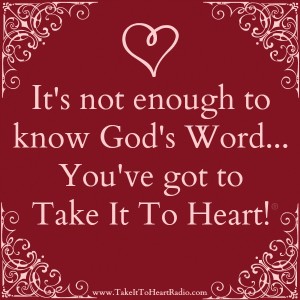 22 But the Egyptian magicians did the same things by their secret arts, and Pharaoh’s heart became hard; he would not listen to Moses and Aaron, just as the Lord had said. 23 Instead, he turned and went into his palace, and did not take even this to heart. 24 And all the Egyptians dug along the Nile to get drinking water, because they could not drink the water of the river. (Exodus 7:22-24)

When we face a difficulty in our lives it may be because God is speaking to us. He wants to get our attention. But sometimes, instead of listening, we try to find a way out by our own wisdom and ability, and, if we succeed, we end up not hearing God at all. Such is the case when we’re having trouble in our marriage, or with our children, or at the work place, or in school. Wherever we are God may be speaking to us through the difficulties, troubles, hindrances, etc. that we are experiencing. It may be something common, expected, or natural at first, but we must not assume that it is merely coincidental. If we practice the discipline of awareness, we will pay attention. Some scholars believe that the Nile turning red “like blood” may be explained naturally. The only supernatural aspect of it, according to them, would be the speed by which it happened. That may be true. There’s no way of knowing for sure. But the context clearly says that it was a message from God, and that is the most important part of this episode (the first plague, Exodus 7:14-24). God was speaking to Pharaoh. But instead of listening, he hardens his heart. In addition, the text says, “he did not even take this to heart.” Are we guilty of doing the same thing whenever something negative is happening in our lives? Don’t just set it aside, or disregard it as nothing. It may be that God is speaking, calling your attention, or telling you the truth about yourself, about others, or about God Himself. Ultimately He wants you to know Him personally, and He may be using this difficulty that you’re experiencing as His medium of communication. Listen to Him and do not harden your heart. Take this situation to heart.